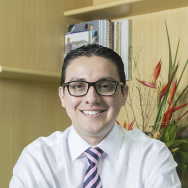 Born and raised in the Galapagos Islands, Ecuador, Dr. Cifuentes graduated in the year 2004 as one of the best dental students of University of Costa Rica. Immediately after his graduation, he did an Externship in Oral and Maxillofacial Surgery at the University of Alabama, Birmingham. After he returned, he established his consult at Gil Dental Group. In 2006, he won the Dr. Ramón García Valverde Award (ACCO).

In 2007, he did an Internship in Prosthodontics at the University of Costa Rica and won the National prize Dr. José Joaquín Jiménez Nuñez, on his presentation about Anterior Dental Esthetics and Proportions. For his academic and professional achievements, he received in 2008 an Honor Mention as “Outstanding Student”, and was accepted for his Masters and Residency in Prosthodontics, which ended in 2010, as a Chief Resident, Honor Graduate and as the Best Student of Postgraduate Studies.

His Masters in Distortion in Dental Implant Impressions received an Honorable Mention by his University, establishing a research line at his program. Dr. Cifuentes has been elected as an Opinion Leader for Biomet 3i Dental Implants (Palm Beach, FL, USA), Neodent Implants (Curitiba Brazil), and Biohorizons Dental Implants (Birmingham, AL, USA).

He still has relations with his dental school in undergraduate courses and as an Associated Professor and course coordinator in the Dental Prosthodontics program.

With Dr. Lucas Gil, he founded one of the first digital Dental Laboratories in Costa Rica: Milling Dental Technologies in 2013, where he is a founding partner and Clinical Director.

Dr. Cifuentes has given lectures in topics related to Dental Implants and the use of new technologies in dentistry. He has his consult as part of the Gil Dental Group, exclusively in Prosthodontics (Oral Rehab, Esthetics and Dental Implants).